Back in January, Gnome Angel introduced a quilt along featuring Elizabeth Hartman patterns. The rules were easy, and I’d admired the Fancy Forest pattern for years, so I started in with great enthusiasm. I chose batiks since I am on a “make those unused batiks into a quilt” kick.  I made the foxes, hedgehogs and rabbits in short order, but then the quilt along fizzled, as did my enthusiasm. 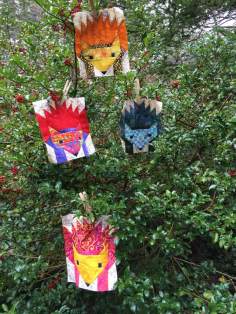 If I hadn’t committed to finishing off the year with no new UFOs, I might never have made a couple owls and a firefly at a retreat in April, but they got done. And then the blocks languished, since I had no idea how I wanted to put them together, and I had to make at least one thistle, but I didn’t know why it was there with all the beasts. I felt a little arrogant questioning Elizabeth Hartman, but really…this is not a quilt from the Scottish moors, is it?

Last week, this queen (too old to be princess) got down off her throne and made that thistle and decided it was time to find a way to assemble the quilt. 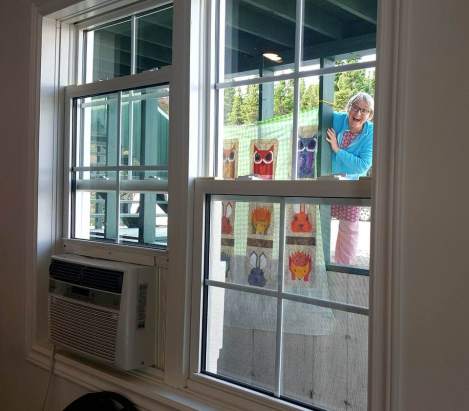 The blocks came to a three day birthday party sew-in to celebrate a friend’s 50th. After several attempts at sticking the “design wall” to the newly painted walls of the conference room (where the only thing the masking tape stuck to was the paint-oops!), I moved it outside to the covered walkway. The birthday girl captured this flattering image of me trying to decide on a lay out. Thought you’d enjoy my early morning sewing attire.
This is the result of my efforts.

I’m happy with the layout, but those tree trunks are too much solid brown for me. A friend suggested adding some leaves, and another had some orange peels left from her applique project, so I scattered a few on the flimsy. There will be more leaves, of different kinds, but I think they’re the answer to my problem. The birds are not from the original pattern, but improv ones, inspired by Tia Curtis Quilts , and created with another friend’s scraps.
Since I haven’t blogged recently, I thought I’d share this flimsy, even if it won’t be quilted for a while. My sewing room now has plaster, and I’m hoping to get the longarm out from under wraps in a few weeks. Until then, the flimsy is all I’ve got.
The flimsy, and some great sewing friends.
Happy end of August!
Linking up with Connie at Freemotion by the River and Tish at Tish’s Adventures in Wonderland.

A quilter for a dozen years, but a crafter since childhood, I love to play with colour and design. My playtime is limited by my real job as an anesthesiologist, but now that my two daughters are grown, and my work life is becoming more manageable, I am adding "blogger" to my list of activities. View all posts by laughinggasquilts

19 thoughts on “Fancy Forest and Birds”